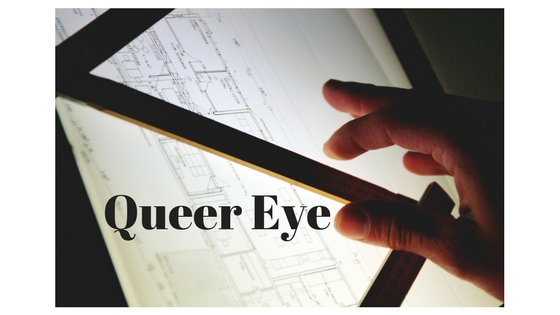 I’m not sure where I was when Queer Eye for the Straight Guy premiered on Bravo 15 years ago, but, safe to say, I was probably stuck in a book working on my Master’s thesis. I remember hearing about it and may have caught part of an episode one time while I was home or out of town. I can’t remember. It must have been good though because the show stuck around for five seasons. As one says in the first episode, “The original show was fighting for tolerance. Our fight is for acceptance.”

Now Gueer Eye is back on Netflix with a new Fab Five; Bobby, Antoni, Jonathan, Tan, and Karamo, each with a different specialty and unique personality. I’m sure they have surnames, but they never introduce themselves that way and they immediately feel like life-long friends to each other and the guy their helping. They hug EVERYONE.

The Fab Five are based out of Atlanta, Georgia and stick to the southern state for all eight episodes. Yes, a Make America Great Again hat makes an appearance. So do more than a few prejudices and misconceptions on both sides. When the show takes the time to meet those views head on and talk about them, it’s at its very best. It slips a little when they gloss over the differences and don’t meet them head-on, keeping their subject at arm’s length, even if that’s how the subject wants it, as I felt was the case in at least one episode.

Heavy lifting makes the rounds among the Five from episode to episode. Bobby, in charge of design, works his magic from mattresses to repurposed furniture. Antoni takes a look at the men’s diet and kitchens, getting them to try new things and even cook themselves. Jonathan is in charge of grooming and the most noticeable changes in the men, only because they’re outwardly the most obvious. Tan works hard trying to find the fashions and style that make the men look like, well, men in some cases while remaining conscious of their preferences. Karamo is in charge of culture and, in more than one case, confidence.

The Five support and appreciate each other’s work and aren’t married to their areas of expertise and instead branch out when they have something more to offer to the men they’re helping. It appears easiest for Antoni to do double duty as food and anything else that might be needed, but even Bobby helps out in areas above and beyond design. In the end, it’s not about changing any of the men, but getting them to see what’s already there and appreciate it by caring for themselves.

I’ve ranked my favorite episodes from the new Netflix series below and hope everyone has a chance to check it out.