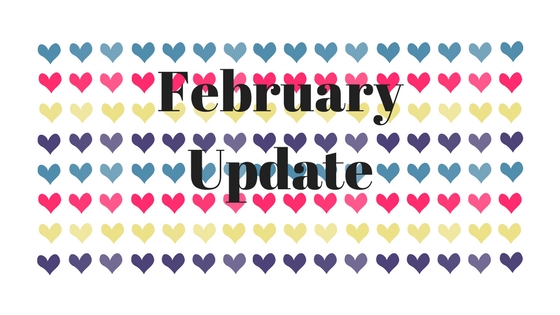 Less than a week until Valentine’s Day. I plan on making cupcakes for my daughter’s class. I did the same thing last year, even though she was sick and had to stay home from school on the day. Valentine’s Day cards are a great opportunity for her to practice her writing skills and for me to finally get a head count of how many kids are in her class and what all their names are.

As far as any more adult plans go, we’re shelling out the big bucks for a babysitter the night before and going out to dinner. Will there be wine? I hope so. That’s it. That’s as crazy as we get. The fact that it also happens to be Fat Tuesday is completely coincidental. Does the fact that Ash Wednesday falls on Valentine’s Day mean things will be more or less crazy?

My daughter also started selling Girl Scout Cookies last week, but she’s six, so really I started telling people she’s selling cookies and they give me their orders.

Haven’t been sewing too much lately, although a friend invited me to a sit and sew workshop kind of deal. It costs, but you bring your machine and supplies and they stay open late so you can sit. And sew. Uninterrupted. Until, like, midnight. The last thing I started working on was a baby blanket, which I may have to take all the stitching out of and start sewing again because I’m not happy with it. I can do better. Not by much, mind you, but it could be better.

Otherwise, I’m in the middle of writing a letter. It’s to the child of someone who was well known, but who’s not alive anymore. They themselves are kind of a big deal and I’m not sure if my thoughts or condolences will be appreciated or even read, but it’s something I want to do. Their parent had a huge impact on me and one of my parents and I wanted them to know. I’m sure they know on some level, but perhaps not in such a specific way how the work of someone so close to them affected so many. It’s a bit of an undertaking. Wish me luck as I attempt to get my thoughts in order and out on paper.

Have a Happy Valentine’s Day if you’re into that sort of thing. The same goes for Fat Tuesday and Ash Wednesday, although I’m pretty sure you don’t wish people Happy Ash Wednesday.

Cat’s out of the bag.