Following our time at the Giant’s Causeway, we made our way west, out of Northern Ireland, back into regular Ireland, to a town called Buncrana on the Inishowen Peninsula. Remember when I said my husband got to do all the driving? Here is where he got tired of driving. From our hotel, we walked into town for dinner. Well, three of us walked. The youngest of our party got carried a good part of the way.

The next morning we made our way up the peninsula stopping along the way to see a waterfall. This was a nice diversion with a 7 minute or so walk on a gravel path to get to the 40-foot Glenevin falls.

We continued on. How far did he go? As far as we could, which turns out to be pretty far, along a two-lane road and then a one-lane road that leads to a small parking area. The Malin Head Signal Station sits on the northernmost point on the island of Ireland, top of the world, next stop to the west, New York. Here there are some nice walking paths near the cliffs, but not so near that you fear for your life. Those would come later. 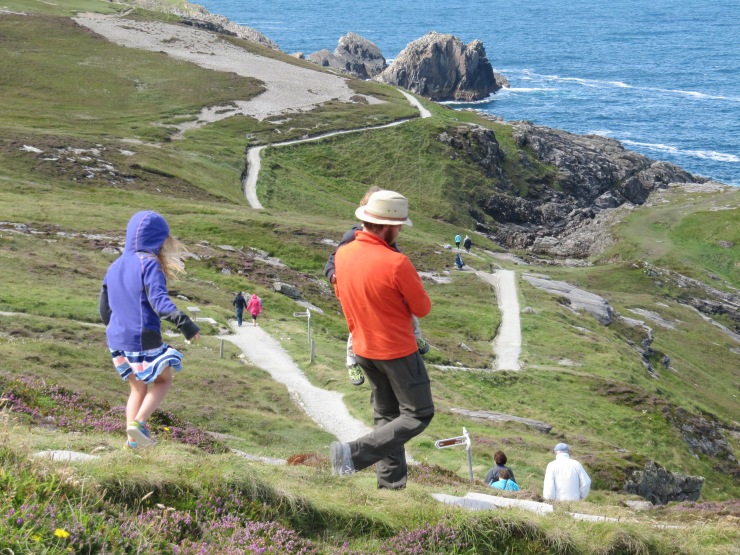 The next day, before we headed south, we stopped at the stone fort, Grianan of Aileach. At this point in time, the sun was still putting in an appearance and we arrived early enough in the morning that only a few other visitors were there, you can make them out in the photo below standing along the top, but they soon left which meant we had the place to ourselves. 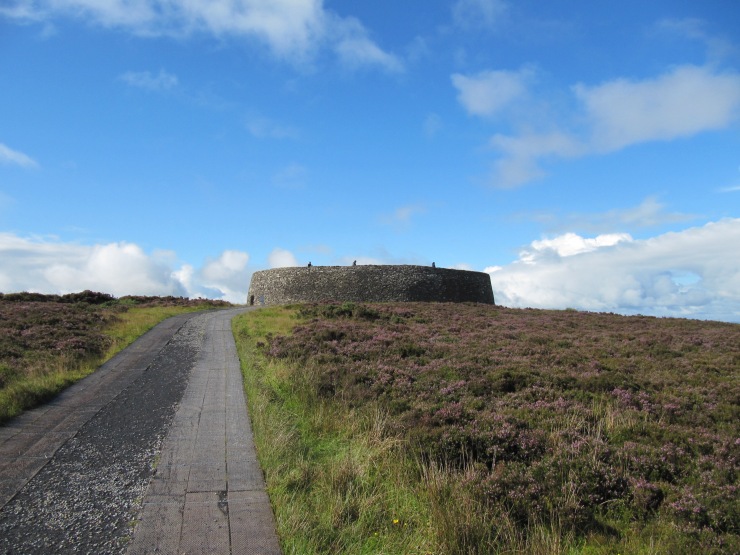 Here’s proof, in my case, that we all went on vacation together.  From here we got in the car and drove for a long time south. I’m sure Galway is a pleasant place, but we didn’t get to go there. What can I say? We’ll just have to go back. Our next destination lay in Ballyvaughan, a small harbour village in County Clair at a wonderful B&B I remember having to talk my husband into giving a chance. This is also the point in the journey when we needed to do laundry. The proprietor was kind enough to get in touch with someone who did it for a fee. I wasn’t worried about how much it cost because we’re a family of four and it was worth the euros not to have to stand around somewhere and wait for laundry.

We took a scenic drive along the coast and visited the Cliffs of Moher. We didn’t go to the visitor center on the recommendation of our hosts but drove right on past it until we saw signs for a coastal cliff walk. We followed the signage, parked in someone’s front yard for 2 euros and walked about 10 minuted to the cliffs.

There was a promontory butte where we probably could have got an even better view, but it wasn’t happening. The trail went right along the edge of the cliff and I wanted to return home with everyone I left with, so we left the cliff walk to all the other adventurous souls and took pictures of animals instead.

This guy had great hair. And he wouldn’t be the only animal we encountered. I didn’t know it, but we would be seeing more wildlife on the next couple of days.

I’ll wrap up our trip to Ireland in my next post and have some suggestions for traveling with kiddos abroad soon after.