I saw this post shared over on the book of faces and I had such an immediate, visceral reaction to it, that I had to stop myself from doing something silly, like replying to my friend who posted it. Instead, I read the comments my friend received. The one commenter scoffed lightly at the missive and my friend agreed in a general tone of, “Haha, my family is nuts.” Here’s the post: 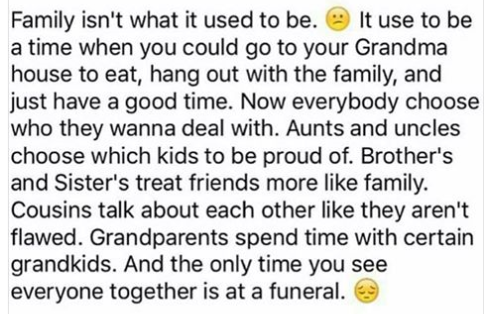 The original “photo” has over a million shares and 11,000 comments.

Who can guess why the original poster was lamenting the fact that their family has seen so much change over the years. This person yearns for the good old days when people white-knuckled their way through a family gathering because that was what you did. You self-medicated with alcohol or (pick your favorite) relative’s dish. Now the only time they see everyone is when they see one of them for the last time.

The author does not appear to have a particular time of year in mind for when family should gather, but it must get trotted out around the holidays because that’s when families come together or are expected to, is my guess.

Let’s break this down, shall we?

“It used to be a time when you could go to your Grandma house to eat, hang out with the family and just have a good time.” People’s definition of a good time differ. The author makes the atmosphere here sound like a relaxed one. There are other places to relax besides Grandma’s house and other people to do it with besides those you’re related to.

“Now everybody choose who they wanna deal with.” One of the benefits of getting older is choosing who you want to spend your time with. With independence and freedom come independence and freedom. I have kids. If I do my job right, as they grow into adulthood they might still want me in their lives and will make an effort to see me in the future. The onus is on me.

“Aunts and uncles choose which kids to be proud of.” This is confusing to me. Is the author mad at their aunt or uncle for not being proud of them or picking and choosing which of their cousins they are proud of? Confusion aside, yes, playing favorites is awful. But maybe that’s why the cousin (we’ll go with that) doesn’t want to hang out at grandma’s house anymore. Why would they? When they can go elsewhere and not have to worry about who’s proud of them and who isn’t.

“Brother’s and Sister’s treat friends more like family.” It’s true some people may be willing to do more for people they aren’t related to than their own flesh and blood, but is that sad? I don’t know. It depends on the situation.

“Cousins talk about each other like they aren’t flawed.” This one I can get behind. Speaking ill of anyone is wrong, be it a family member or not. No one is perfect. But just because someone is family does not mean they should be spared a good talking to when it’s needed. Yes, that might require speaking about them, but as long as the concerns other family members have come to light, some planning may have to take place.

“Grandparents spend time with certain grandkids.” Well, that’s just sad any way you read it, but perhaps there’s a reason for it. My kids don’t get to see their grandparents very often because they live far away. If my parents or in-laws had other grandchildren that lived closer who they got to see more often, I would not begrudge them their visits, especially considering the author’s last statement.

“And the only time you see everyone together is at a funeral.” Don’t forget weddings. Oh, wait, you get to send invitations to a wedding. Not so, for a funeral. Although don’t tell my mother; she insists hers will be by invitation only (Love ya, Mom). And so the author touches on a drawback to all that independence and freedom. Exercising your right to pick and choose does not necessarily grant you freedom from regret or other consequences.

My sympathies go out to the person who wrote this because they’re right. Family is not what it used to be. Family is an amorphous idea we each carry around with us in our heads and hearts. In this day and age, the end of 2017, I believe family is what you make of it. Families may be spread far and wide and people may see their friends more often than blood relations. That doesn’t mean you forget where you came from. It means you take the lessons you’ve learned from your family and you do the best you can. You make new families made up of people who might not share blood but do share a mutual something that brought them together. It could be anything. And that’s amazing.